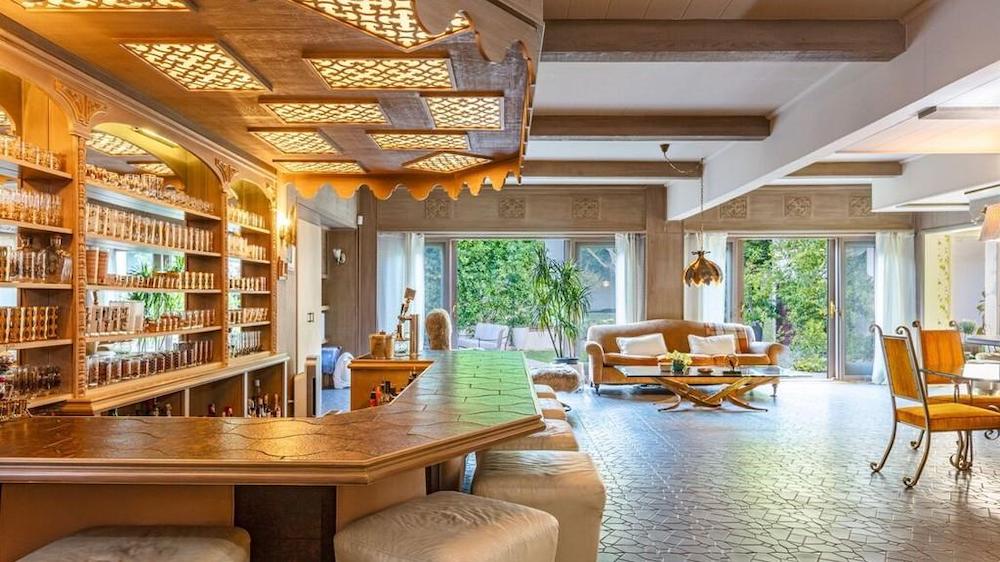 A classic Los Angeles home built in the early 1900s and renovated in 1969 awaits its next chapter. Owned by the actress Bridget Fonda and her husband, the composer Danny Elfman, it’s a vintage decor dream.

âIt is sort of like a time capsule from that era. It is an original 1969 kitchen, with the Formica countertops and the yellow that you can see in the cabinetry, the lower countertop bar with the stools that pull up to it,â explains the listing agent, Rayni Williams. âIt has a TV that comes down from the ceiling with just a flip of a light switchâwhich was very cutting-edge for 1969.â

The home at 75 Fremont Place is large, at 4,238 square feet, and is on the market for $4,888,000. Itâs in the gated community of Fremont Placeâa small and exclusive enclave in the cityâs Hancock Park neighborhood.

It sits next door to what used to be Fonda and Elfmanâs longtime residence. They purchased this place a few years ago to serve as a guesthouse.

âWhen 75 [Fremont] came on the market, Bridget Fonda, whoâs an amazing artist, happened to be walking in the neighborhood and she saw that it was for sale. She realized that it was a contiguous lot to hers. She went into the open house and completely fell in love with it,â Williams explains, adding that the home had been on the market for only a short time.

That was in 2015. After swooning over the 1960s charms within, Fonda bought and rehabbed the whole house, keeping the midcentury modern style and vibe.

âShe set-dressed it, so to speak, from the midcentury era, to within an inch of its life. I mean, it looks like youâre walking into the set of âCasino.â It is just extraordinary,â Williams says.

Fonda tore down the wall between the two homes and treated the two properties as one entity, adding some amenities to the 75 Fremont property and removing others.

âThereâs a wellness center with a dry sauna and a wet steam [room]. Thereâs an outdoor shower. And then she filled in the pool, because she had the pool at 114 [Fremont],â Williams explains, adding that Fonda had originally planned to sell both properties together.

The strategy changed when the couple sold the home at 114 Fremont in December for $8.75 million.

âThe wall is going back up as we speak,â Williams says.

The house has four bedrooms and six bathrooms. The period furniture is not included in the list price, but could be negotiated into a sale.

âEvery bedroom is a different color and offers sort of a different journey through this period of time,â Williams explains. âIn one of the upstairs rooms, you can see the emerald green room that has the leopard carpet. That is a fabulous and really big bedroom with a massive walk-in closet and a massive bathroom that she made into a really beautiful office.â

A sunken bar is the centerpiece of the main living area, which also includes a family room, den, and dining space. A stone fireplace completes the midcentury look.

Williams says the buyer is likely to be either be a celebrity who wants the privacy and security of living behind the gates in this exclusive neighborhood, or perhaps a family looking to get into the area.

As for keeping the decor and style intact, Williams says that remains to be to seen and that the buyers, appreciating the advantage of living in this gated community, might choose to remodel.

âI’ve actually had a bunch of showings, and maybe a buyer won’t live with it as period as it is,â she says. âThey might put the pool back in, and they might refurnish it into more of a typical modern-day family home. It is easy to make it back to that.â

Williams says sheâs in love with the home just the way it is.

âI literally laid on the floor and said, âI have to have this house,ââ she says with a laugh. âI sell special homesâand Iâve never seen a house like this in my career. Itâs just perfection for what it is.â